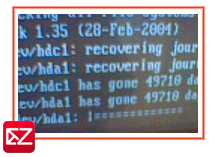 This may be the most important post you will ever read. If you’re a Zimbra Administrator, please read, and pass this onto your colleagues who use Zimbra. If you’re a CTO or CEO, take time to ask your Zimbra Admin about the subject of this post. This blog post is about backups.

Whether your an Open Source User, Zimbra Desktop User, or Network Edition Customer, you can do backups of your data. There is nothing worse than getting a call from a customer, or a Private Message from a Forum User that says, “I need help. My HD has crashed, and all my backups were on that drive.”

Let me Digress for a moment, and share with you my personal experience with backups. It’s sort of a Legend here at Zimbra. It all begins in 2005, Zimbra was the new kid on the block and I was an inexperienced System Linux admin for Tombstone Unified School District in Arizona. This was a small district with limited funds. When I interviewed for the post, the Superintendent handed me his card, and it had a Hotmail address on it. Right then, I knew this would be quite a difficult job.

One of the first things I did, was investigate E-mail Server platforms, and TCO (Total Cost of Ownership). A quick search on the interwebs (which is a series of tubes, not to be confused with the you tubes), yielded this new thing called a Zimbra. Much like our millions of Users, I downloaded it and tried it. It worked great! We used the Zimbra Open Source Edition (then it was in Beta).

I was so proud of my cool new setup, and our staff were so excited to finally have good e-mail and calendaring. In knew the importance of keeping backups, and archiving. All of you System Admins at Hospitals and Government institutions know what I mean. You get well acquainted with the Laws and Requirements. So, I would stay up until about midnight, and stop Zimbra, and rsync /opt/zimbra into /opt/zimbra/backups. Keep in mind that this was in the early days of Zimbra, and I wasn’t even an employee yet. As a matter of fact, myself and several others, pioneered the Open Source backup procedure.

Everything was great until one night I noticed I was running low on Disk Space on my /opt partition. So, I thought, “If I just remove all my backups, and make a fresh one, that will save me a bunch of space”. So I ran the following command as root:
rm -rf /opt/zimbra backups
Now, back then, we mounted a clamav partition ramdisk for quarantine purposes. The only indication that I had that something was wrong was when I got an error saying that it couldn’t unmount the partition because it was in use. Everything else in /opt/zimbra was gone…including my backups.

As most of you admins know, preserving data is important. We were involved in several litigation matters, and I would later be cited for obstruction of justice for destroying evidence.

When I noticed what had happened, I immediately called Zimbra and talked with MarcMac here at Zimbra. He tried to recover the inodes using Midnight Commander, but it was a total loss.

Lesson Learned. So, from one admin to another, please take time to make sure your backups are not located on the same machine that Zimbra is on. Please! We never want to hear about data loss. Whether an opensource user or network user, I hope you will take a few minutes to consider your backup strategy, and fix any single points in failure.

Learn from my experience.
-John (jholder)