Linux users have pondered: “Wouldn’t it be nice to just grab Zimbra software via repositories?”

There was just so much positive feedback over Zimbra Desktop Beta 3 (with over 900 new members to the forums last month!) we thought that Ubuntu 32-bit users should be able to grab it easily. (64-bit support is coming soon)

This brings Zimbra Desktop’s easy setup against ZCS, Yahoo! Mail, Gmail, AOL and any other IMAP/POP accounts to the huge Ubuntu community – letting them take mail, contacts, calendars, tasks, documents, and briefcase items offline and sync whatever actions they may take when they’re reconnected.

To install:
sudo synaptic (As you’re read this it’s being added to Applications > Add/Remove.)
Enable the third party packages in settings > repositories.
Reload, search for “Zimbra”, and away you go. (same as a sudo apt-get install zdesktop)

Once downloaded, start via Applications > Internet: 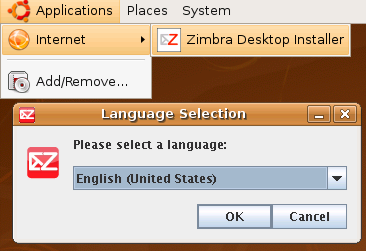 Many thanks to the Canonical Team for showcasing us on their frontpage: ubuntu.com/news/zimbra-desktop

Not using Ubuntu? It’s cross-platform for other Linux variants, as well as Windows and Mac – grab it here.

You may ask: “What about the entirety of the Zimbra Collaboration Suite Server in Ubuntu or other repositories?” We can’t say one way or the other at this point – but think of this as a harmonious step.

Find help for Zimbra Desktop over in the Community Forums, ask us a question below, or fill out the Ubuntu registration/feedback on it: ubuntu.com/register/zimbra/