Zimbra 8 is the first major Zimbra release that embodies new practices around quality engineering. We thought we’d shine a light on these changes.

While quality has always been important to the development process, quality processes are now more formalized than in the past.  Starting with the Zimbra 8 release, our major release processes include:

The QE team runs both automated and manual tests against the code. We’ve been steadily increasing the test coverage over recent releases: 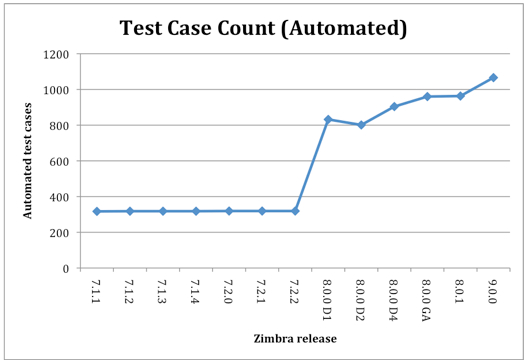 The team continues to develop tests, focusing on the highest severity and priority issues.

There are many maintenance releases between the major releases. Each needs the same focus on quality – but there’s often less time for testing.

We’re working hard to balance the need for fully testing new features with the need to get new features in the product quickly.  One way we’re doing this is by moving to a quarterly release schedule, making critical fixes available by patches between maintenance releases.  This lets us focus getting features onto the schedule without compromising quality and stability.

The good news is that we’re seeing a downward trend in bugs attached to support cases – particularly in 2012. As of the end of Q3, fewer than 15% of support cases are connected with bugs. 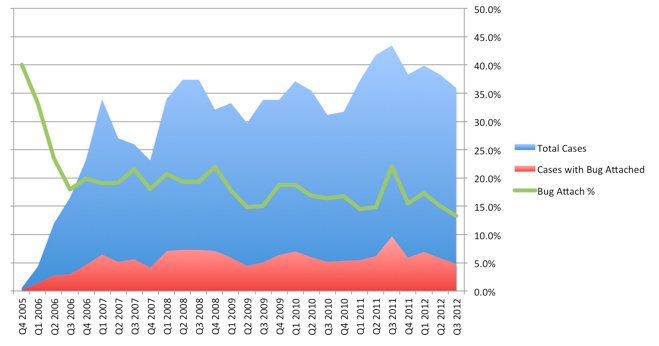 Nobody’s perfect, of course.  You keep using Bugzilla to report those bugs that managed to get by our QE team, and we’ll keep trying to find them before you do.

John leads the engineering and product teams for VMware Zimbra. As part of this team, John manages the product roadmap, product priorities, engineering investments and quality assurance initiatives. Previously, John managed business and product strategy for the mobile messaging group at Openwave Systems, which included the multimedia messaging, voice mail and instant messaging product lines. Prior to Openwave, John was responsible for leading the teams that defined product strategy and go to market planning at Mspect (acquired by Telephia) and Cellmania (acquired by RIM). John has a Master of Business Administration degree from Chicago GSB, as well as a Bachelor of Arts in political science and a Bachelor of Science in environmental engineering from Northwestern University.
View all posts by John Robb →
CyberWeek Savings on Zimbra 8 – Save Now, Save Later
December Webinar: Simplify IT Efforts While Meeting Governance and Compliance Requirements

3 Responses to Behind the Scenes with Zimbra Quality Engineering