Because we will be dealing with MX and A records, performing this tutorial will result in downtime for
your server.

This tutorial has been tested on CentOS 4 using Zimbra Collaboration Suite 4.5.5 on i386 architecture. Although the installation of BIND may very from system to system, the basic configuration remains the same across platforms.

Due to the nature of DNS, it is highly recommended that you test before implementing. If you have difficulty, please feel free to stop by the Zimbra forums: http://www.zimbra.com/forums

Let’s see if everything we need is already installed:

As you can see, not all of the needed packages are installed. I need “bind-devel”
and “caching-nameserver”. 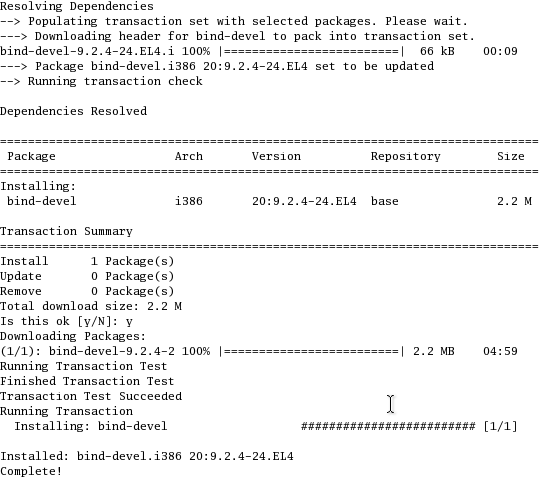 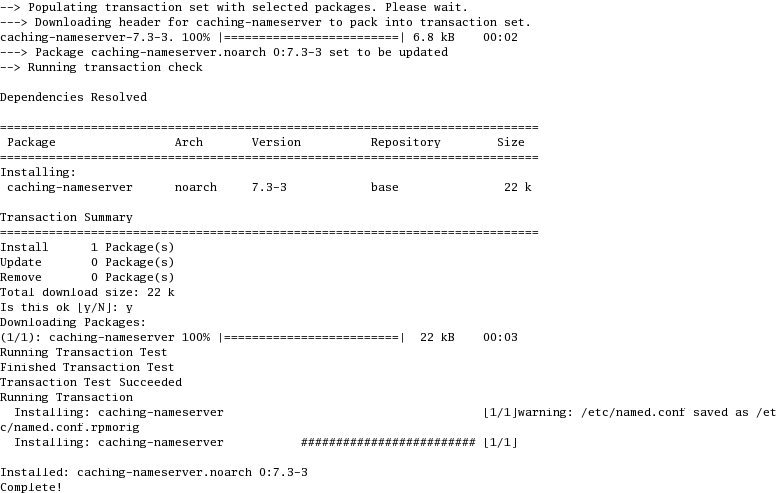 Now, let’s turn it on on for runlevels 3 and 5 at startup:

Time to start BIND, and make sure it’s running:

In this tutorial, the domain we’ll be creating is yourowndomain.com. You can replace this with your own domain name.
We’ll also be using vim as our editor. It really doesn’t matter which editor you use, as long as it uses UNIX carriage returns.

Now we will configure BIND to be a primary name server for a single zone. (Don’t know what a Zone is?) We will add the hostnames www and mail. We will also have BIND respond if no hostname is specified in a query (i.e. yourowndomain.com).

BIND stores its configuration data in named.conf which is located in the /etc directory. The zone data files are stored by default at /var/named (unless you have chroot. See below).

Scroll through the file and take a look at the contents. Locate the localhost zone:

Move the cursor on the blank like below the }; and press the i key. The i key puts vim in insert mode (you should see — INSERT — at the bottom of vim). Press the enter key once then type in the following. Note: the spacing in front of type, file, and allow-update are tabs, so press the tab key on each of those lines.

Switch over to /var/named and make a copy of the localhost.zone file and save it as yourowndomain.com.zone. This will give us a template to work with so we don’t have to type as much. It also saves us from changing the file’s owner, group, and permissions.

We’re going to use localhost.zone as our template:

Make sure that yourowndomain.com.zone is owned by named, not root.

This is the point where a lot of administrators run into trouble. How you configure this is 100% up to you; however, there are some caveats.
Most administrators have an internal DNS server that serves their clients inside their network only. This means that your DNS server only has authority for your LOCAL zone. You cannot alter internet zones such as yahoo.com.

If you intend on changing your hosts file/ip address, I highly recommend that you run in terminal only mode. The x server does not like it when you change them while x is running. The x server may become unresponsive. Because DNS servers are queried by IP address, and not hostname, it is recommended that you have a static IP address.

You’ll need to adapt this tutorial for your own network. If your DNS server is internal, you will need to modify your outside DNS server adding Host A and MX records. However, because the Zimbra server will resolve locally, the system will not warn you that you cannot receive mail from the outside world. As far as Zimbra is concerned, it cannot tell the difference between an internet DNS server, and a local DNS server.

Put vim in insert mode and alter the zone file so it looks like the data below. Use tabs between items. Where I use 10.211.55.6 you should replace with your public IP address (or private NATted address if your running internal only).

**NOTE: 192.xxx.xxx.xxx and 10.xxx.xxx.xxx IP Addresses are NOT routable beyond your gateway. If this is a public DNS Server, you cannot have one of those IP addresses in your DNS Setup.

Now the following command works fine, if you have bind-chroot:

OR (if bind-chroot is not installed)

With "IN MX 10 mail.yourowndomain.com." we are declaring a mail exchange (or mail server) with a priority of 10. Since we only use one mail server the priority has no effect.

The server does not update as you change the zone file(s). You’ll need to restart the server by running:

Now that bind is all set up, we need to set it up to point to itself.

This should be a big red flag. You can see by my resolv.conf, I have DHCP turned
on. I later turned it off, as it caused lots of trouble. :)
10.211.55.6 is the IP address of our nameserver (mail.yourowndomain.com)

We also have to give the computer the correct hostname

And set up our hosts file:

This ensures that if the system needs to reach mail.yourowndomain.com, it will find it on 10.211.55.6

To find out if our nameserver is resolving correctly, let’s run a dig on our server: 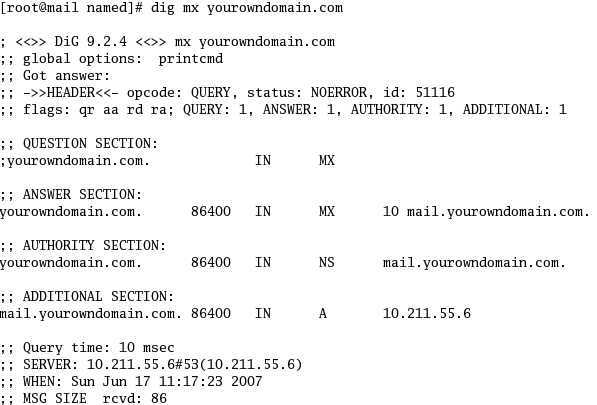 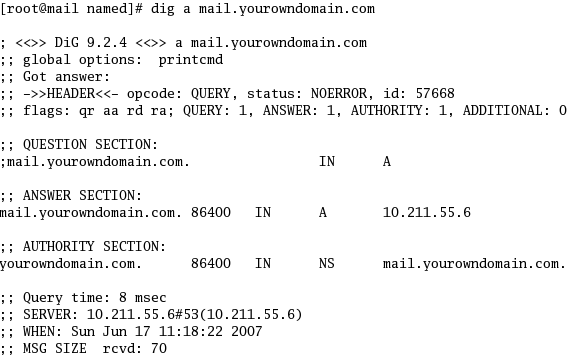 This part is pretty straightforward. If you server is operating correctly, the installation process will show you that it queried for dns records, and was successful:

The installer asked if I wanted to change my domain name, I said yes, and changed it to yourowndomain.com. The installer went flawlessly, and I could send and receive mail.

If you can’t resolve your domain, you may want to check the following:

Are you using DHCP? If so, try making your address static

Do you have your named.conf pointing to your correct zone/host file? Are the locations correct?

Do you have chroot installed?

Are the permissions correct?
They cannot be owned by root. They should be owned by named.

Is your own server pointing to itself as a resovler? Check /etc/resolv.conf

Zimbra Forums – DNS
In a Nutshell

Thank you for subscribing to the Zimbra Newsletter.

To ensure future delivery of Zimbra Newsletters to your inbox, please add zimbra-team@zimbra.com to your address book or safe senders list.

In the meantime, you can view the archived ZImbra Newsletters here.