Zimbra community members are often asking us how to integrate Zimbra with Samba in order to replace their current directory with Zimbra LDAP. User lfarkas, posted an article to Zimbra wiki where he wrote: “If we can manage posix and samba account in Zimbra’s LDAP server through Zimbra admin UI, than we’ve got everything (we only must configure Samba to use Zimbra’s LDAP server) and in this case that can be a real killer app!”.

Today we posted to Zimbra Gallery three extensions for Zimbra Admin UI that allow do exactly what lfarkas was talking about. In addition to these extensions. A detailed HOW TO that explains how to use the extensions and configure Linux and Samba to use Zimbra LDAP is now is Zimbra wiki: UNIX_and_Windows_Accounts_in_Zimbra_LDAP_and_Zimbra_Admin_UI

A short 3 min video demonstrates this feature in action. 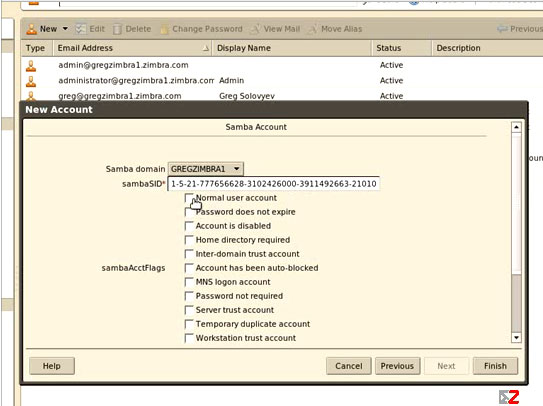 View all posts by admin →
Web 2.0 for the Enterprise – Webex Zimlet
The Power of Search Part 1: The Search Bar