Did you know that Zimbra has a Legal Intercept for Law Enforcement feature? This is used to obtain copies of email messages that are sent, received or saved as drafts from targeted accounts. Intercepted messages are sent to a designated shadow email address. Legal Intercept can be configured to send the complete content of the message or to send only the header information. When a targeted account sends, receives or saves a draft message, an intercept message is automatically created to forward copies of the messages as attachments to the specified email address.

In this post, we will cover setting the Legal Intercept via the Admin Console and via the command line.

In Zimbra 9 and above you can configure the Legal Intercept feature on accounts via the Admin Console: Accounts→Advanced→Legal Intercept 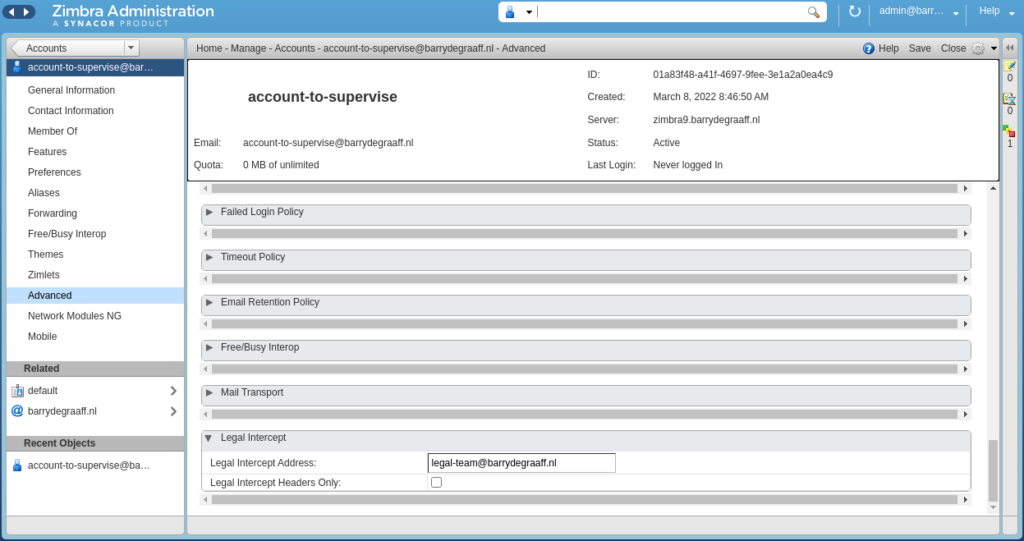 Once configured, emails received and sent from the account will now also be copied to the Legal Intercept address.

More configuration options and enabling Legal Intercept on a Class of Service (COS) can be done via zmprov on the command line.

You can use zmprov to configure Legal Intercept on a Class of Service or for individual accounts. The following attributes are used to configure the feature.

The following parameters can be used in the From, Subject and Body templates to modify the default intercept message.

If enabling by COS, type:

Thanks,
Your Zimbra Team