Recently, I sat down with Chris Murtagh, system engineer and CTO for RE Technology, a company that publishes reviews of software and services for the real estate industry.  I wanted to get a sense of why he chose Zimbra for the organization and how the company has benefited.  We also discussed AnyMeeting and the other Zimlets within Zimbra that he and the company primarily use to help grow the business.  Chris was very gracious and provided some interesting insight on Zimbra and how it can benefit any company.

How long have you used the Zimbra Collaboration Suite?

I’ve used Zimbra since 2008, that’s when I first started playing with it.  I’ve worked for three separate companies and have always ended up being the guy who puts all of our systems together.  So, we have been on lots of different email providers, from home grown systems to full suites like Zimbra.  We’ve decided that for everything we need, Zimbra is absolutely perfect.  We’ve been on it for roughly two and a half years now with RE Technology.

Can you talk a little about how you have used Zimbra as a tool to help grow your business?

One of Zimbra’s main selling points for us was its ability to work cross platform.  We’ve worked with a lot of email systems where Apple products handle their folders in a different manner than say, Microsoft Outlook.  Zimbra provides all the really simple documents to configure and allow it to play with all devices.  The other thing we found extremely helpful was the calendaring and the Briefcase systems.  We were a little disappointed to find out that they were going to be pulling the Briefcase systems out on the newer versions as that was a big sell for us initially.  We use it for collaboration; we do a lot of outsourcing work as well as in-house work.  We’re always using it to share files between co-workers, clients and general consulting people as well.  Everyone in our company uses Zimbra.

How is Zimbra different from other platforms you have used and what would you say makes it easier to implement?

One of the big things we have been dealing with is all of our upper executives are Apple people and all of my co-workers and people below me are PC people.  Each one of those mail clients handles things differently with the iMac protocol.  We used to do this manually, but as the company began to grow, we just found it to be too hard for us to continue to try to upkeep it.  So we started looking around and the first place we went was Gmail for business.  It worked well with the Google Docs, but there were certain limitations there.  We couldn’t set our own quotas instead of just accepting the Google quotas and paying for it.  So we were really looking for something that would provide us with the all-around flexibility of what we needed, yet still be able to accomplish everything.  Zimbra popped up on our list, I opened it on our development laptops and to tell you the truth, fell in love with it right there.  We jumped on with version 5.0 and have been pretty much using it ever since.

Can you talk a little about Zimbra’s integration with other services and what Zimlets your company uses?

That was actually another thing for us because on top of being a development house, we are also a consulting firm and a product catalog for the real estate industry.  So, we do a lot of collaboration work with Zimbra.  We were looking around and we had already been with WebEx at that point and we noticed that they had a Zimlet, so we installed it.  There were a couple of little hitches, but it was a much smoother process overall than the overall import ICS, export ICS process we had previously relied on.  So, we’ve actually gone with a couple different Zimlets, we done the Smartsheet Zimlet, WebEx and now currently we are totally in love with the AnyMeeting Zimlet.  It makes it so much easier, you can go ahead and set up any of the meetings we have right then and there, and it’s really simple to install and configure.

Right now in our deployments we have AnyMeeting, which is our primary or go-to Zimlet, we have Smartsheet, which is also a good one.  We have also used the Salesforce Zimlet, but ended up migrating away from it as our needs changed.  We also use a lot of Zimbra’s calendaring and functionality Zimlets.  A great one that should have been put in by default is Zimbra’s holiday calendar.  With schedules so busy, we’ll turn around and show up to work, and nobody’s here.  We’ll turn on our email client and realize, oh yeah it’s a holiday.  So, Zimbra has provided a lot of really good Zimlets that expand the underlying functionality of Zimbra into your day-to-day usage instead of just being a mail client. 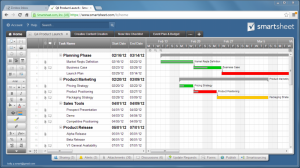 Can you talk a little more about Zimbra’s integration with AnyMeeting specifically?

We love it for us, because we do a lot of collaboration with a lot of outsourced parties and a lot of team members who are located all over.  For example this morning, we just launched our brand new product, and we were using AnyMeeting with the team, my development team in California, my executive team in New York, the client executive team in New Hampshire, and a third development team in South America.  This was all in one meeting, and it only took three clicks to set the whole thing up through the AnyMeeting Zimlet.  That’s what we really like about the Zimlet, it makes it so much easier.  With the Zimlet, I don’t have to go to the AnyMeeting site, I can do everything right from Zimbra.

Do you find Zimbra’s support program helpful when you have questions or when an issue comes up?

I’m a developer, so I’ve been locked in Linux with development work and I haven’t had a single problem with Zimbra’s software suite.  So, I have not really had a chance to work with their support team.  I’ve heard nothing but good things about them, but if you develop and deliver a product that you don’t really need to have people talking to your support team, more power to you.

How do you plan to use Zimbra going forward as your business grows?

We plan to continue to use Zimbra much in the same way we have.  We were a little disappointed that they were going to be pulling the Briefcase section out, but now that they are going to be opening it as a secondary tool, that doesn’t really affect us so much.  So we plan on keeping Zimbra around for the life of the company.  Its backup capabilities are extremely easy and it’s provided a lot of stability for us, which is a good thing.

Would you recommend Zimbra to others and what features would you point out?

We highly recommend Zimbra.  In fact, I’ve recommended it at least four or five times in the last month and a half.  One of the things I really like and point out is that everything is drag and drop, which makes it really easy to use on the fly.  Because we are such a mobile team, I really like that Zimbra has taken the time to include mobile template capability.  You can open it on your Android or iPhone and everything is displayed right there.  It works and everything does what it’s supposed to do.  It’s a great stable product.

TJ is the Social Marketing Manager for VMware’s Apps Marketing Team. As the Social Marketing Manager TJ drives the social and blog strategy for VMware Zimbra. Prior to joining the VMware team TJ worked for Zuora where he successfully ran social programs to drive general awareness and demand generation. Throughout the years TJ’s work in social has led to publications in both The New Yorker and Techcrunch. Besides social media TJ enjoys spending his time fly fishing, cooking, and hanging out with his family and friends. TJ holds a Bachelors degree in Environmental Economics and Policy from the University of California, Berkeley.
View all posts by TJ Laher →
December Webinar: Simplify IT Efforts While Meeting Governance and Compliance Requirements
Zimbra Reduces the City of Garden Grove’s IT Costs While Increasing Employee Productivity

Thank you for subscribing to the Zimbra Newsletter.

To ensure future delivery of Zimbra Newsletters to your inbox, please add zimbra-team@zimbra.com to your address book or safe senders list.

In the meantime, you can view the archived ZImbra Newsletters here.