Hey, did you hear that Google released a browser? Yeah, and it’s very cool! We might have been a bit early to call Safari the Browser war winner. Based on WebKit (KHTML), this rendering framework (that Chrome uses) has really stormed the market. If you asked us five months ago who was winning the browser war, we would easily say Firefox, with Safari as a close second. With the introduction of Chrome, a new war has started.

At the start of this century, the war was about “Open-ness” and who could be more open and win the hearts of users. Now it’s a war of speed, and who’s faster. A few blogs and articles have been written, with Mozilla and Google both claiming their JS engine is faster. So who’s right? Both are faster than IE (6, 7, and 8), but in our opinion, what matters is how responsive web applications are. So who will win Zimbra’s Speed trophy?

Zimbra has a testing harness thats in alpha which we will be making available to the public in the future, that measures performance on different actions within Zimbra. This helps us understand what the end user is seeing. People can talk V8 Benchmark, Dromaeo, SunSpider, or what ever they want. What really matters is how applications perform. Our tests are pure UI performance, ie, how fast Zimbra is to the end user.

Considering that one of Zimbra’s strengths is our AJAX web interface, we decided to put Chrome to the test, along with IE, FireFox, and Safari. The control system was: Intel Core2 duo, 2.39Ghz 1.99GB RAM Windows XP

Here’s how it did (lower is faster): 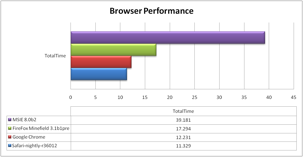 Given that Chrome is built on WebKit, this didn’t come as any particularly huge surprise. In our previous tests, Safari came out the fastest renderer of the Zimbra Web Client. In our tests, Chrome came in as a very close second, and we expect it to get faster.

We want Chrome to work as good as FireFox or Internet Explorer. So, if you find an issue, please report it in the bug report below.

Want more info on the browser war? Check out these links:

View all posts by John Holder →