What do you get when you combine a rock solid e-mail server, cutting edge web-based technologies, and a group of talented developers, administrators, and users? You get the Zimbra Worldwide Community.

On August 29, 2005, Kevin Henrikson posted a blog entry on how to build Zimbra Open Source.

September 07, 2005, the Zimbra Forums went live. This was a place for users who were using our Zimbra Collaboration Suite Beta to post their questions, problems, and suggestions. Little did we know how things would go. (Wayback Machine)

In October 2005, Zimbra wowed the Web2.0 crowed. In a follow up post, Satish Dharmaraj (CEO of Zimbra) writes in his blog entry:
"Zimbra will absolutely be hosted for businesses and, yes, Zimbra will be hosted for individual email. When? I hope real soon."

And now, it’s May 2007. Starting next week, we’re going to be posting some news on this blog that will soften even the hardest nonbeliever. . .but I digress. That’s not why I’m writing this post.

As the forums leader, I think we have the most devoted, and helpful users available. We used to scramble to answer posts as they came in. . .but recently several community members stepped up to the plate. They learned Zimbra, and taught others. 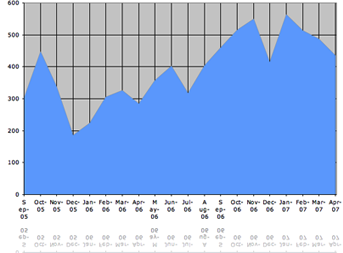 dijichi2 has even created his very own port of Zimbra for Solaris and is considering starting a SPARC version , GSilver wrote a post on how to use filters to send all mail into an archive account, and mmorse devised a way to use Zimbra’s built-in RSS feed and feed reader to share mailboxes until we release ZCS 5.0 which will include shared mailboxes.

Since the end of 2006, we have seen registration stats go higher than they’ve ever been. Users seem to come in waves. But, that’s not the best part. The best part is that they’re staying.

Remember, we’re not a news site, or a social networking site. Different game. We’re a community of developers and administrators.

Along with Zimbra Collaboration Suite, Zimbra Desktop, PowerTips, and our partnership with Comcast, the Community has become it’s own story.

In March, I did a study to see exactly how fast our response time was for our forums. Here is the exact text of the e-mail I sent internally: 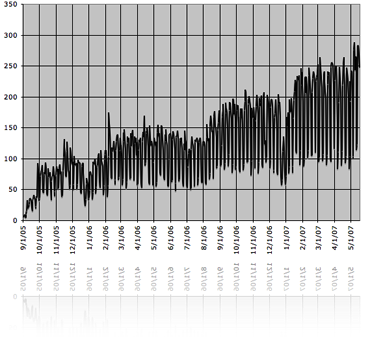 Keep in mind, that a good majority of those are Open Source users who post. We do have Network Edition customers who post as well. . but in either case, we have a 89.4% response rate! That’s pretty dang good, especially considering the user activity!

On the right, we have a graph of user activity starting from September 2005 to May 17, 2007. User activity are things like forum posts, private messages, reading posts, etc. As you can see, the forum users are signing up, and reading and posting content. Of course we hope that you will join us, and help us raise that 89% to 100%.

Recently, we added a new forum, "Zimbra Success Stories". We want to hear the good stories from our users. The forum is less that 2 weeks old, so it hasn’t really been populated yet, but rvissers wrote a nice post:

So, what’s the point? The point is that we have an amazing worldwide community on which you can depend. Many user and employees are ready to help you with your deployment.

If you haven’t installed Zimbra Open Source or the Network Edition Trial yet, give it a try. You’ve got a community of over 8,000 users to help. We think you’ll love it here :)

If you haven’t already, please become a member of the forums and please: pay it forward.

View all posts by John Holder →